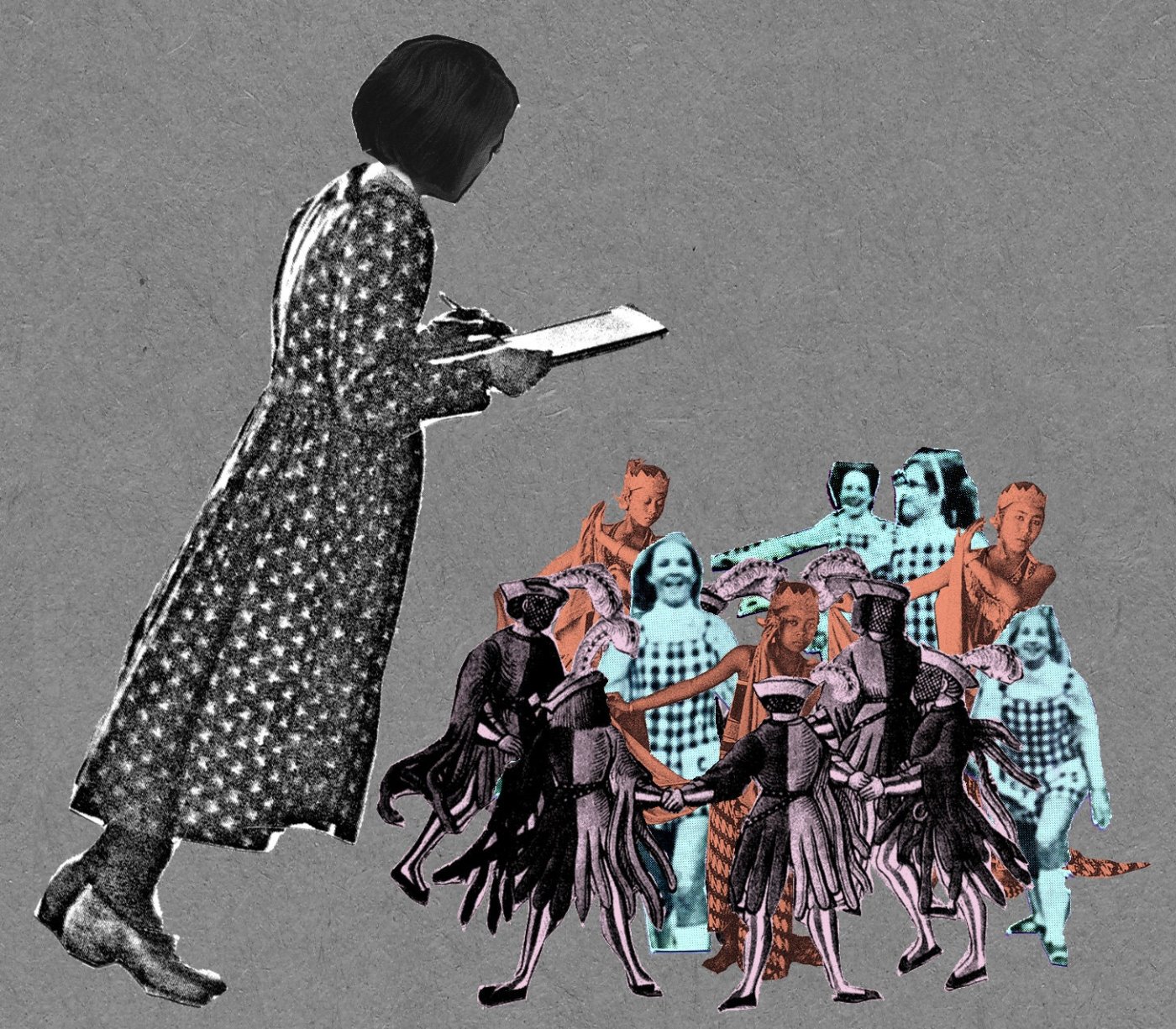 Anthropology, as a discipline, has been concerned with the very lives of people—focusing on how different people experience and interpret the world, which many other disciplines in the social sciences have been attentive to as well. Nevertheless, the most remarkable trait that has distinguished anthropologists from scholars of other fields has been the participant-observation method that they have relied upon. It is via stepping into the lives of others that the anthropologist became both a participant—in the activities of the people studied—and an observer, of the daily interactions of people. It is also via stepping out, afterward, from the worlds of the same people, that allowed the anthropologist to reflect on his/her experience as a participant-observer; identifying structures, deriving symbolic meanings, describing patterns, theorizing about being human. However, some anthropologists have decided to take a step back even further to bring into the discussion not only the lives of others but also the very lives and ambitions of the anthropologists themselves—providing a critical inward gaze. One such anthropologist is Clifford Geertz, who has deeply influenced the discipline and become one of the most-cited anthropologists ever; another such anthropologist is Tim Ingold, whose “unusualness” in his vision of anthropology sparked my interest in a transformative idea of anthropology and led me to write this paper. Thus, in this essay, I will be focusing on some of the major ideas of Ingold while drawing a contrast to those of Geertz by taking one of Geertz’s works as an example. My intention in choosing Geertz as contrast lies in his popularity as a scholar—thus making him a representative, to a certain extent, of the common approach followed by many anthropologists today.

To understand Ingold, one has to also understand his approach to knowing. To him, “to know things you have to grow into them, and let them grow in you, so that they become a part of who you are” (Ingold 2013, 1)—which, he believes, applies to anthropologists too as they “study with people […] and hope to learn from them” (2013, 2). Ingold thus characterizes anthropology as “transformational” and as fundamentally different than ‘ethnography’, which he describes as “documentary”. In other words, to do anthropology is to study with and learn from; whereas to do ethnography is to do a study of and learn about. In such a distinction, Ingold associates participant observation with ‘anthropology’ and not ‘ethnography’ because he believes “participant observation is a way of knowing from the inside” and not “a technique of data collection” (2013, 5). In fact, Ingold views an otherwise approach to participant-observation as “fundamentally unethical” (2013,5) as he likens it to entering the world of the other, disguised in stealth as a social scientist, claiming to learn yet seeking evidence, and leaving once one’s bags get filled—cutting ties and running, turning “our backs upon the world in which we live and to which we owe our formation” (2013, 5-6).  Hence, to avoid such unethical scenarios, Ingold proposes to “replace the anthropology of with an anthropology of with” (2013, 8) while portraying doing ‘anthropology of’ as wanting to turn whatever one encounters into an object of analysis. Ingold’s objective of doing an ‘anthropology with’ is evident both in his career as a professor and in his scholarly works concerning human-environment relations. His famous, both anti-disciplinary and interdisciplinary, undergraduate course called ‘The 4 As: Anthropology, Archaeology, Art, and Architecture’ aimed at “ways of thinking through making, as opposed to […] making through thinking” (Moore 2019, 348) and thus consisted of hands-on and an ‘altogether’ approach to learning from the inside through activities such as hunting, knotting, walking on the beach, etc. The idea inherent is also noticeable in his concept of ‘human in an intersubjective world’ which argues that in human-environment relations, it would be erroneous to consider human beings as “self-contained, individual isolate which then interacts with his or her surroundings” (Ingold 1996, 114). Instead, animals and other objects should also be perceived as interacting beings and things that make up the worldly engagement in which we “act together with” them (Kuan 2021, 15). As an example, in his work on Skolt Lapps in Finland, where livelihood centered on herding reindeers, Ingold presents a non-anthropocentric view of the reindeer as “men and reindeer represent two inter-acting populations. […] both men and deer communicate among themselves […] and play a guessing-game about the other” (Ingold 1974, 523).

Geertz’s approach to doing anthropology can be best summed up in his notion of thick description which requires the researcher to understand culture via interpretation, “an inquiry that involves placing a cultural act—a ritual, a game, a political campaign, and so on—into the specific and local contexts in which the act is meaningful” (Moore 2019, 190). This led Geertz into treating culture as a form of text and doing ethnography as “trying to read (in the sense of ‘construct a reading of’) a manuscript” (Geertz 1973, 10). In other words, the concept of culture, according to him, was “essentially a semiotic one” (1973, 5) which required an interpretive approach that sought for meaning. As an example, drawing on the work of Gilbert Ryle, Geertz depicts the analogy of “winking” and “twitching an eyelid” (Moore 2019, 194). What differed in these concepts, although possibly pointing at the same physical action, was that while the former communicated a specific contextual meaning out of multiple other possibilities, the latter did not. And it was the use of “thick description” in ethnographic writing that identified the contexts and meanings that centered on acts such as winking. However, the methodology that Geertz describes, I believe, would not conform to Ingold’s idea of knowing from the inside. As is evident in the title of Geertz’s book, ‘The Interpretation of Cultures’, interpreting does not require one to actively engage with the thing being interpreted or read, but to simply identify its context, although not necessarily, from a certain distance. “Trying to read a manuscript” and “to seek meanings” is certainly different than “being involved in the re-writing of a manuscript” and “to learn from a manuscript”—in a transformative sense. One can surely interpret cultural behaviors and derive symbolic meanings out of rituals but stay simply unchanged. This is, of course, not to argue that pursuing thick description is not transformative at all, but simply to point out the vast differences in both methods and the potential metamorphic impact that gets attached to the participant-observer’s self. To give a concrete example, it would be apt to tackle Geertz’s work on the Balinese cockfight.

In his work on the Balinese cockfight (2005), Geertz narrates his attendance to the illegal yet widespread cockfights in Bali, Indonesia, and provides the language of everyday moralism of the Balinese society at the time. According to him, cocks are “symbolic expressions or magnifications of their owner’s self” (2005, 61). After such a symbolic linkage, Geertz proceeds to write about various social phenomena centered on cockfighting like gambling, cock-caretaking, and matchmaking—arguing that the cockfight “renders ordinary, everyday experience […] to the level of sheer appearances, where their meaning can be more powerfully articulated and more exactly perceived” (2005, 79), thus becoming a “meta social commentary” (Kuan 2021b, 24) of the Balinese’s own form of violence and hidden negative feelings. If we were to place Ingold into the shoes of Geertz in the same context, I believe an utterly different methodology and reflection would have followed. Firstly, Geertz does not mention whether he himself ever gambled or learned to raise a cock and prepare it for a fight—which would have obliged the anthropologist to do as a result of Ingold’s proposal of ‘knowing from the inside’; because learning required practice (Ingold 2013). Secondly, although cockfighting, both literally and metaphorically, centers on the existence of cocks, Geertz prefers a more one-sided and human-centric narration of cock-master relations and interactions as he mostly explains how the Balinese men “spend an enormous amount of time […], grooming them (their cocks), feeding them, discussing them, trying them out against one another…” (2005, 61) . However, I presume Ingold would have provided more room to the decisions, movements, and the group status of cocks which also partake in the ‘worldly engagement’ of the individuals that Geertz studied, providing a more comprehensive ecological and existential perspective. Lastly, Geertz’s conclusion that “societies, like lives, contain their own interpretations. One has to learn how to gain access to them” (2005, 86) bears an assumption that acts like cockfighting always involve a symbolic meaning to be deciphered. Such an approach overlooks the fact that actions and cultural behaviors do not necessarily have to involve a symbolic dimension but simply be done for other reasons. One such reason could involve certain transformative purposes of the agents, such as adapting to change—which is noticeable in how Ingold narrates the new strategies developed by the Skolt Lapps like predatory pastoralism, with “technology adapting to reindeer behavior” (Moore 2019, 343). To put it simply, directing one’s attention to the act of reading a text could hinder one from seeing what stands on the tip of one’s nose, which would require one to readjust his/her lenses of the eye; and such readjustment, according to Ingold, could be done via ‘knowing from the inside’.

To conclude, my comparison in this paper of the two mentioned anthropologists does not aim to prefer one approach over another, but rather touch on the contrasting views of Ingold in reference to the way anthropology has taken shape in its contemporary period—which significantly bears influences from often-cited theorists like Geertz. I believe it is unique approaches to doing anthropology brought by Ingold and many other scholars that create room for heterogeneity within an intellectual field. And this heterogeneity should not resemble any sort of rampant incoherence in anthropology but rather be understood as seeking alternative methods and approaches to expressing human experience—which is already inexpressible enough in its subjectivity and complexity—and as the enrichment of the tools of the anthropologist.

Featured image belongs to Joanna Neborsky and is taken from here

Moore, Jerry D. Visions of Culture : An Introduction to Anthropological Theories and Theorists, 2019.