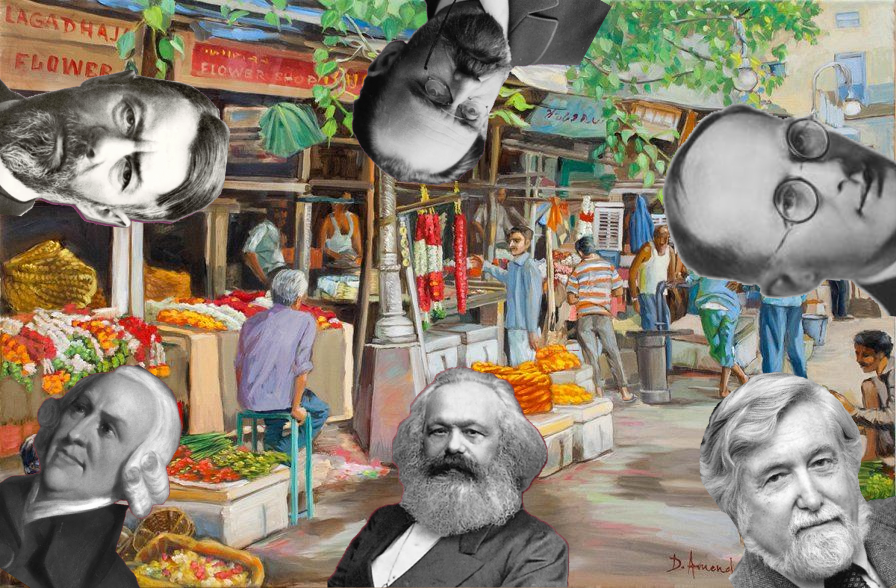 If we are to investigate discourses of economics brought by people of varying intellectual backgrounds such as anthropology, sociology, history, and economics, we can see how some thinkers have looked into structures, some have investigated morality, some have examined cultures, and some have examined pure numbers. After having an (superficial) exposure to such different views on a very human aspect of life, it has become apparent to me that all ideas regarding human economic life derive from assumptions regarding both what human nature is and what is rational. It is precisely because of this reason, that each theory somehow molds human nature and rationality into one model, that in this writing I will be looking at some of the ideas to present the case that any theory that invokes these two concepts is essentially a barren one, and does more harm than being fruitful to the discussion of human economic life – especially in a secular context.

Let’s start with the three assumptions about human nature, which are self-interested man, social man, and moral man. The assumption about humans as self-interested by nature is associated with microeconomics, which has its roots in the Enlightenment period. Thinkers like Adam Smith and David Ricardo believe in the idea that human is “rational maximizer” (rationality – to be discussed later in this writing). On the other hand, the idea of the human as a social creature has led people like Durkheim and Marx into proposing theories of political economy – and deciding what the best form of social-economic life is. And lastly, the assumption that man has moral and cultural sentiments in economic decision-making has given birth to many ideas in cultural economics and has been adopted by people like Weber, Malinowski, Geertz – who all have derived their thinking from building further frameworks on how we should approach the problem of ‘rationality’. I argue that the first two sets of assumptions (self-interested and social man) about human nature are radical and over-generalizing, while the cultural way of thinking about human nature (moral man) is less-so – but breeds further problems about the notion of ‘rationality’, which is to be discussed in the latter half of this journal.

Asserting that human is self-interested or social by nature is radical and over-generalizing because both ideas completely dismiss the tensioned relationship between agent and structure. To further clarify, agents belong to structures while structures are made up of individual agents – thus, making the concepts of ‘structure’ and ‘individual’ inseparable from each other. However, any theory built on the assumption of a self-interested human nature ultimately turns a blind eye to humans’ roles and responsibilities to the structures that they belong – be it religion, family, culture or, society as a whole. On the other hand, political economy models (social man) stand on the other edge of the spectrum by solely looking into structures and dismissing much of individuality. And these two radical approaches make the moral and cultural understanding of human economic life (moral man) seem like a middle-path… which reaches a dead end due to its discussion of rationality – which brings me to the latter part of this journal, after having discussed human-nature.

When we speak of cultural economics, and its dubious relationship with rationality, we can first consider Weber’s distance toward the idea of rationality in economic behavior as he draws a historical narrative of how morals, over time, receded from the domain of economic life as a result of capitalism. And as opposed to Weber’s linking of rationality to non-tradition, many anthropologists like Malinowski and Spiro argued that all humans are rational when investigated in the right cultural context. Some other anthropologists, like Boas, have argued that although all people are rational, they may at times follow cultural traditions instead. As a somewhat different approach, Geertz has avoided invoking the concept of rationality but presented a relationship between cultural and societal expectations. Today, these ideas have mostly evolved and have led many anthropologists in taking a postmodern position by relativizing all rationality and arguing that everyone is ‘maximizing’ something in one way or another. And it is precisely because cultural economics has evolved into such a cultural relativist idea of thinking that I believe speaking of ‘rationality’ in any way harms our view of human economic life. It is utterly a barren discussion to claim that in any economic activity, human maximizes some sort of aspect that is understandable in a certain cultural context. Because by doing so, the concept of ‘rationality’ becomes completely meaningless as we can always invent reasons for an action’s rationality once we discover it – hence we find ourselves trapped in a dead-end.

So far, I criticized various economic theories that are built on assumptions of human nature as I found them radical – except the path that leads to cultural economics. Then by looking further into this path of understanding human-nature as moral and cultural, I proceeded to criticize assumptions of what rationality is and how speaking of any sort of rationality is pointless in a relativist position. And my criticism of everything that has been said regarding human-nature and rationality may lead the reader into wondering: Can we ever speak of what ‘human nature’ and ‘rationality’ is? And this brings me to my final point. To borrow Nietzche’s terms, after we ‘killed God’, we can’t speak of what human nature or rationality is as these are existential questions that only make sense in theological contexts derived from ‘divine sources’ (since only the creator(s) of human-nature can truly know what human-nature is). So, does this imply that we can never understand or speak of human economic life in secular contexts? I would say that by avoiding the discussion of such problematic terms of ‘human nature’ and ‘rationality’, and by purely observing the richness of human economic behavior we can talk about humans and economics without ending in unfruitful discussions. In other words, the beauty of understanding human economic life and the relationship between human nature, social structures, and economic life lies precisely in leaving an open-end by not delving into concepts of human-nature and rationality. Hence, I believe that anthropology should present the richness of human behavior in life by embracing the role to narrate the diverse ways people understand and act in economy, and to ask people why they do the things they do; instead of misleadingly and unfruitfully theorizing about why people choose and act in certain ways – if we are to adopt secular ways of analysis and thinking.