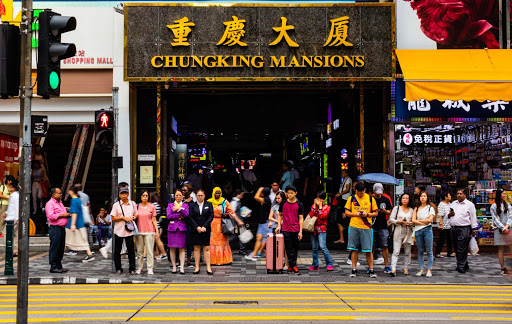 Chunking Mansions… A place so crowded yet so lonely in middle of Tsim Tsa Tsui. It is crowded because a lot of people from South Asia and Africa, whether Hong Kong citizens, asylum seekers or illegal workers, strive to make a living. It is lonely because it is, in the eyes of many local people of Hong Kong, a place of insecurity. An insecurity that derives from the prejudiced views that many people have towards ethnic minority groups. It is such contrasts that make Chunking Mansions a place so interesting to Anthropologists where low-end globalization could be observed among the people that come from more than 120 nations, according to some reports. Even though I had a couple of chances to visit and taste the delicious Halal food, offered in Chungking Mansions, that I normally cannot find in other places in Hong Kong; in our class fieldtrip, I felt privileged to dig deeper into what Chunking Mansions is about and what kind of a unique culture, emerged with the negotiation of various cultures around the world, Chunking Mansions has embodied. Before going into details, I would like to state that, before our fieldtrip, I decided that I want to investigate things in a way that would help me better understand why local Hong Kongers try to avoid going to the place. So, every event that I observed, I tried to think, what could make it seem ‘unsafe’ to many people. And to be honest, it was a tedious effort to investigate things that I found fascinating and interesting and spot the ‘potential threats’. Therefore, I agree that I may have unjust conclusions in my some of my observations.

After we gathered and started to walk towards the place, I was offered leaflets by people from South Asia in a rather non-Hong Kongese way, that is, the manner was rather more insistent compared to what a leafleteer would typically do in Hong Kong. So, I wondered if this could be a reason why some people get a negative impression of the place. However, as a person who has lived in Sri Lanka for 4 years, I was familiar with all the business traditions, rituals and practices that I observed, such as insisting on giving a leaflet. And now that I am reflecting on the moment, I realize that I have rejected much more leaflets from Hong Kong leafleteers than the people I had come across in Sri Lanka. So, a relatively insistent practice in offering a leaflet would probably result in gaining customers who have no idea about which place to eat ‘curry’ out of a dozen restaurants in Chungking Mansions.

Moving Inside the Shops

After a short walk in the streets, when we first started touring around inside, I noticed that many shops were closed. I wondered if it was because of recent protests in Hong Kong. However, I came to know that it was because the shops had different opening hours. So, I wondered if protests ever affected the place at all, unaware of what had happened a few days ago, which I will touch upon later. We then walked into a shop that sold smartphones. Having read about the mobile industry happening in the place, I expected all the mobile phones to be fake. However, the shopkeeper said that they came from United States and acknowledged their authenticity. He also mentioned that, before, Chungking Mansions was the center of mobile phone industry. Since he referred to the past about the significant mobile industry and did not, currently, sell any knockoffs, I suspect that the major shift of focus in business has changed over the years in Chungking Mansions. We also got a small surprise when the shopkeeper, who was originally from Pakistan, started speaking Cantonese. It is funny that I was more shocked that my local classmates were shocked than the fact that a Pakistani, whose previous generations have all lived in Hong Kong, spoke the local language. Because I thought that it was common for ethnic minorities in Hong Kong to speak Cantonese since they have been here for a lot of decades and are the reason why Hong Kong is considered a multicultural city. Therefore, I sensed that most of the shopkeepers in Chunking Mansions were most of the times perceived as ‘the Other’. The same experience re-occurred when we went inside a travel agency where the travel agent said that they were the fourth(?) generation Hong Kongers originating from Pakistan. Additionally, he mentioned that it was their family business and they had their shop since their grandfathers’ time (I remember him mentioning 40? Years ago). His statement reflected the histories that dwell in most of the shops which go unnoticed unless spoken about.

After touring around the shops in the first two floors, we took the elevators and went to tour the hostels which offered accommodation for an extremely cheap price, considering the amount you would pay in hotels in the area. The elevator system was rather old, and you had to wait a lot in order to be able to get on it. When we had asked about if there were any restoration projects, the tour guide mentioned that since there are more than 700 owners in Chungking Mansions, it is almost impossible to form a mutual agreement. We could only use the elevators by splitting to small groups, our tour guide, who was a very friendly African man, greeted many people and received the same, if not more, friendliness whenever we were going up or down the floors or passing by shops. It could be said that people who spend time in the place create rich networks and find common grounds to communicate, even though there may be vast differences in cultural practices or beliefs among parties. And I had not observed such sincere encounters and interactions in Hong Kong for a long time. Therefore, even though I had initially intended to detect the ‘unsafe’ in every detail, I could not help but feel more elated inside Chungking Mansions than I would feel outside, considering the amiable atmosphere formed by such people.

We later moved to the rooftop to find ourselves surrounded in the middle of slim, tall, and old buildings which hinder the view of luxurious buildings that reside around the harbor. And below, the narrow back alleys of Chungking Mansions which was somewhat filled with litter, were visible. Perhaps, it is the view of back alleys which form a thinking that Chunking Mansions is not hygienic. However, I see such narrow paths behind many business center buildings in Central as well. So, the problem is perhaps not uniquely attached to Chungking Mansions.

After our observations on rooftop, we went down to the first (or second?) floor and gathered with other tour groups of our class to hear Jeff, who is an Indian Christian born and raised in Hong Kong, regarding the recent events encompassing Chungking Mansions and ethnic minorities in Hong Kong. He started his speech by talking about how much the ethnic minority communities, who are also Hongkong citizens, could not develop much dialogue with the local Hongkong people. He mentioned that many ethnic minorities who were raised and born in Hongkong were not able to speak Cantonese due to the marginalized education system provided to them. He later moved to the recent happenings and how there was an initial fear of being targeted after the assault of Jimmy Shams by a group of South Asians. He added that Chungking Mansions has never faced such a threat that the shops were being notified to stay closed due to safety reasons. And this led the people of Chungking Mansions to unite, or as Jeff says “Me, an Indian Christian, and my friend who is a Pakistani Muslim sat down to think of what we can do”. On the day after, minority groups in Hong Kong started a pro-Democracy demonstration, led by Jeff, to deliver the message “Regardless of skin color, race, or religion, we are all Hong Kong people.”. He mentioned the amount of cooperativeness and benevolence that occurred, whether about the drinks that were constantly provided or the support of local people who came and visited Chungking Mansions (perhaps for the first time).  He mentioned how he had never witnessed Chungking Mansions crowded with that many people. Jeff also touched on how recent happenings significantly changed majority of people’s views on ethnic minorities and Chungking Mansions in a positive way. When I look back at his claims, I think he is right in saying that there is a shift of people’s views on ethnic minority groups who are part of Hongkong. However, unfortunately, I do not see it as a historical point that would erase people’s prejudices completely. As Jeff said, the dialogue can last as long as it is continued. Who knows what people would start thinking about ethnic minority groups once the media displays another crime committed by an ethnic minority group in Hongkong? I do not quite understand why there should be a major shift in people’s views, which had not changed much throughout generations. Because we should not forget that the cause of this change is only a single event which happened in the heat of a very political timeline Hongkong is going through, in which people are in a rollercoaster ride of declaring friends and foes.