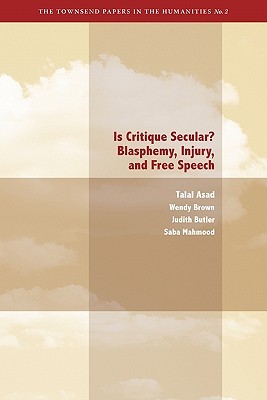 The recent European discourse on blasphemy as applied to the behavior of Muslim immigrants in Europe serves, paradoxically, at once to confirm and to deny difference. Angry Muslim responses to the publication of the Danish cartoons are seen by secularists as attempting to reintroduce a category that was once a mea ms of oppression in Europe, while they see themselves critiquing, in the name of freedom, the power to suppress human freedom. For the worldly critic, there can be no acceptable taboos. When limits are critiqued, taboos disappear and freedom is expanded. This criticism doesn’t merely liberate ideas from taboos, however; it also reinforces the existing distinction between the paradigmatically human and candidates for inclusion in true humanity who do not as yet own their bodies, emotions, and thoughts. It reinforces, in other words, the ideological status of European Muslims as not fully human because they are not yet morally autonomous and politically disciplined.

The modern problem of blasphemy, one might say, is a European invention. For a secular society that doesn’t acknowledge the existence of such a thing as blasphemy, it is quite remarkable how much public discourse there is about it-and about those who complain of it or claim to be affronted by it. Quite remarkable, too, is the obsessive need to repeat again and again the words and images that secularists know will be regarded by the pious with horror. Who, one might wonder, are these defenders of worldly criticism trying to convince? It is too simple, I think, to claim-as some Danish commentators have done-that the publication of the cartoons merely sought to overcome the crippling fear that Europeans had of criticizing Muslims. But there is certainly something complicated going on beyond the rational defense of political freedom, something that may have to do with reassuring the limitless self by making a distinction between good and bad violence, with a desire that is impossible.

The limits to possible forms of action are articulated by social values. And of course all such limits are invested with potential violence, even (especially) the value of limitless self-creation. Certainly the violent language and the riots that greeted the Danish cartoons are evidence of one kind of concern about limits. But so too are the modern wars (preemptive and humanitarian) that seek to establish a particular moral order in the world or to make liberal democracy safe within its own bounded spaces-in ”Fortress Europe.”

Here is a final thought: What would happen if religious language were to be taken more seriously in secular Europe and the preventable deaths in the global South of millions from hunger and war was to be denounced as ”blasphemy,” as the flouting of ethical limits for the sake of what is claimed to be freedom? What if this were to be done without any declarations of ”belief,” and yet done in all seriousness as a way of rejecting passionately the aspiration to totalized global control? Of course Europe’s proscription of theological language in the political domain makes such a use of the word ”blasphemy” inconceivable. But does this impossibility merely signal a secular reluctance to politicize ”religion,” or is it the symptom of an incapacity? This question is not intended as a moral reproof but as an invitation to look again at an empirical feature of modernity, especially the notion of secular criticism.