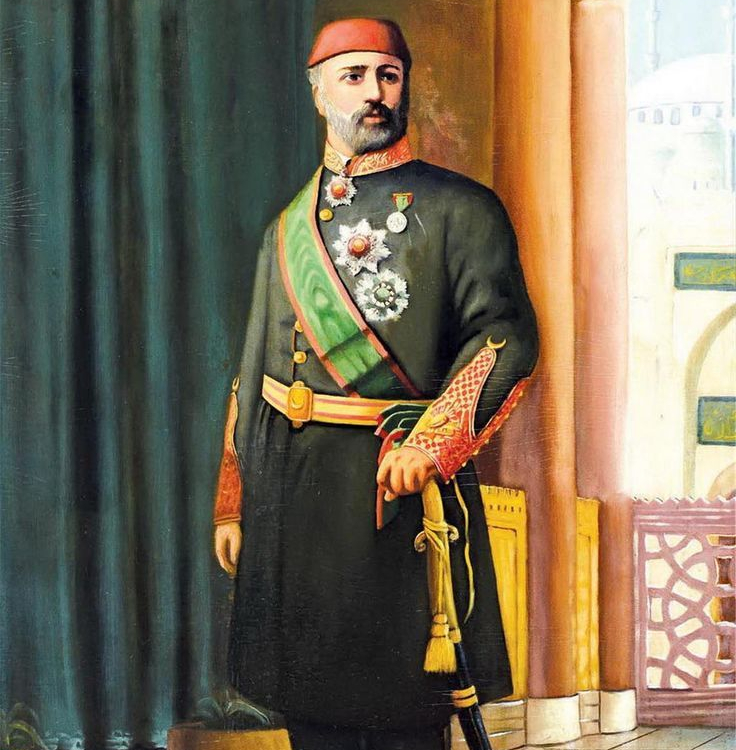 It is time to turn back to the pages of History and observe an Ottoman Sultan (Emperor) which I had known little about in the past and whom I now find extremely fascinating given the fact that his name is diminished by the potency and the success of his predecessors.

Abdülaziz, the 32nd (5th from last) Sultan of the Ottoman Empire, was born in 1830 and reigned until 1876. Even though he was known for his extravagance, he dressed simply. He was 9 when his father passed away, therefore, he was raised under the supervision of his elder brother Sultan Abdülmecid I who greatly valued the education of his brother. Even though he received an Ottoman education, he admired the material progress in the West.

Abdülaziz spoke French fluently and had a vast interest in music and poetry. He had his own compositions, and with his talent in drawing, he himself sketched the structure of the Ottoman ships at the time. He loved archery, horsemanship, hunting, and especially wrestling. In fact, he used to wrestle with the greatest wrestlers inside the Ottoman borders in his time.

Due to his admiration of the Western progress, he was the first Ottoman Sultan who traveled to Western Europe and visited some important European capitals such as Paris, London and Vienna.

After a rebellion in 1876, Abdülaziz was dethroned by the military and imprisoned. 4 days later, he was found dead with both his wrists cut. Even though initially it was perceived as a suicide, it is believed that he was assassinated since it is not logical for someone to be able to cut his other wrist while his other wrist is cut. How tragic…

After a brief history, it is time to reflect on what actually urged me into sharing this figure in Ottoman history: Abdülaziz’s Compositions and his branched personality.

I first found out about his compositions after I encountered his La Gondole Barcarolle and Sultans Polka.

And they both are extremely magnificent, elegant and touching. To be fair, I am certain that these pieces could have dwelled with the giants in its genre if they had been composed by a Western composer. Nevertheless, they are Western Classical Music Compositions. As someone who had briefly studied about the Ottoman History, I never knew the Western influence was that significant in the Empire’s fall period that even the Emperor composed Western Classical Music, which is completely isolated from nature and could be considered as “contrary” to the understanding in Ottoman Classical Music. However, further digging into his works, I had my heart melted after hearing Bî Huzûrum.

So, this bodied man who ruled the Ottoman Empire for 15 years, who wrestled with the greatest wrestlers had his heart fueled with romanticism. And he was able to reflect that perfectly by taking a stroll in the different ends of a spectrum and speaking out his soul both by poetry and music. Additionally, he would sometimes find himself somewhere in the middle of this spectrum and therefore end with beauties such as Hicaz Mandıra and Hicazkar Sirto, which are like amalgams achieved by fusing precise amounts of two separate ingredients.

Abdülaziz’s tragic dethronement and assassination are particularly concerning. As a Sultan who branched out in multiple directions and who thought and acted prismatically, Abdülaziz’s historical visits to Europe and his efforts on ‘modernizing’ the Ottoman Army by utilizing the advancements in the West did not please everyone. The fact that the West, having been deeply affected by the Ottoman power from the 15th to 17th century, had surpassed the Ottomans in advancements after the 18th century was not accepted by the Ottomanist minds. And this ideology that failed in differentiating between benefiting from Western advancements and emulating the West, was the poison, along with nationalist movements, that led the Ottoman Empire to its bitter end. Therefore, one could reflect on this and deduce that without the person molding his/her way of thinking by filtering his/her thoughts through molds of various shapes, that person is doomed to live under the advancements of those who do.

To support on Patreon…